A pair of Dragons Feng Shui Water Feature
US$108.88
Add to Cart

Pair of Mandarin Ducks
US$22.88
Add to Cart
Bestsellers 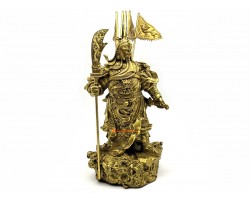 An immaculate brass sculpture of the Kwan Kung in the most prestigious form, very popular among collectors! The most famous military General in Chinese history, this mighty Kwan Kung statue is standing majestically holding his formidable weapon - the Dragon blade (Guan Dao) in his right hand and a sheathed sword on his left. The 5 victory flags adorned with images of good fortune Dragons represent the 5 elements in Feng Shui. He is also accompanied by several Dragons at his foot, making this impressive Kwan Kung statue the most powerful for attracting good fortune energies, protection against evil forces, energizing family achievements, inviting more helpful people, countering inauspicious stars and enhancing business and political advancements.

This exuberant statue of Kwan Kung is impeccably presented, and is highly desired among both Feng Shui practitioners and art enthusiastic.

Kwan Kung (Guan Gong, Kuan Kong), originally known as Guan Di, was one of China’s most prominent and successful war heroes. After many achievements, he was titled God of War or Saint of War, and bestowed with his new name (which is known to people today). He has become renowned as the “Great Protecter”, who defends politicians, businessmen and the Armed Forces. He is the bestower of equality, defending the innocent and revered by the righteous. His use is highly recommended by Lillian Too, famous Feng Shui grandmaster and author, as he even has the power to protect against thieves and supernatural spirits. Needless to say, we display a statue of Kwan Kung in our Feng Shui shop too. In Hong Kong, one can see a shrine of Kwan Kung in every police station.

The Kwan Kung is a very useful symbol to have especially for businessmen. When Kwan Kung is placed at the front reception desk facing outside, he is believed to protect your establishment from embezzlement and con. In addition to this, he is said to help eliminate malignant chi and protect from competitors, providing your establishment with the chance to flourish and obtain monetary gain. Because of his strong history as a major war lord and guardian, Kwan Kung is a desired symbol by businessmen; it is believed that placing Kwan Kung behind the desk or work area will always provide support and sustenance from prominent people. It is said that no malicious intents can pass by Kwan Kung, and so he is a representation of wealth-protection and safeguarding.

The Kwan Kung, because of his command and influence, is ideal for individuals in quest of authority in politics and office status. The figurine of Kwan Kung is suitable to be placed in many areas, be it your home, office or workplace. A gift someone in business will highly appreciate.

In Feng Shui, Kwan Kung is used in many ways to benefit the business and well-being of his beholder. Here are some Feng Shui tips on how to best reap his benefits:

1) In the home, Brass Kwan Kung statue is most potent when displayed in the Northwest corner. In the office, simply place his image behind the desk or work area (optimum for those with immense power, such as managers, executives and politicians). Doing so will keep you guarded, preventing any betrayal or backstabbing.

2) In Asian countries, Kwan Kung is deeply revered by police forces and triads; they believe that he will provide them with triumph in their conquests.

3) For protection against embezzlement and con, as well as a enhanced sense of loyalty among colleagues and victorious business ventures, Guan Gong must be placed within the workplace or shop, facing the entrance. Lillian Too, famous Feng Shui author, has said that she owes the business success of her boutiques to Guan Gong. Any establishment is believed to be able to flourish and prosper under his watchful eye, creating a sense of stability with the staff and integrity of employees.

4) Place Guan Gong facing your main entrance to expose and repress anyone with evil intentions – all “Sar Chi” (killing breath) and negative chi will be eliminated, reflected by Guan Gong’s violent demeanour.

5) According to the Feng Shui Bagua Eight Aspirations Formula, displaying Guan Gong in the Northwest corner of your living room or office will create Mentor Luck – this is because Guan Gong presents confidence and success, nurturing those who seek to be leaders. Mentor Luck, Nobleman Luck or "Gui Ren" luck is the kind of luck that will bring you a good samaritan or someone kind and helpful who will give you a lending hand or a life-changing push during times of distress, trouble and difficulty; not necessarily in the form of money but also opportunities, wise advice, support, encouragement or simply be there to listen. Doing so will also ensure unity and calm for the family to function, as well as protect the patriarch from any harm.

*Note* While praying to Kwan Kung is not a must, he should still be treated with the utmost respect. Never place his figure in the bedroom, in the kitchen or on the floor.

Brass Kwan Kong on Victory Horse
US$89.88
Add to Cart

A pair of Dragons Feng Shui Water Feature
US$108.88
Add to Cart

Pair of Mandarin Ducks
US$22.88
Add to Cart
Bestsellers