5 Element Charm for Health, Wealth and Happiness
US$25.88
Add to Cart

Laughing Buddha on Dragon Tortoise
US$25.88
Add to Cart
Bestsellers 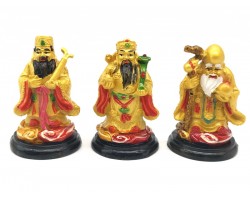 The Three Lucky Immortals, Star Gods, Fu Lu Shou and Fuk Lak Sau are the various names given to the venerated god figures of wealth, good fortune and longevity. They are symbols of the necessary elements for creating an inner balance of harmony. Fuk Lak Sau are a stable presence in a great many Chinese and feng shui practitioner’s homes.

Each god carries a different object with a unique meaning, alluding to their ingredient to the formula for a wonderful and happy life. In combination they radiate good luck, blessings and inner harmony.

Fuk is usually depitcted holding a child in his arms and is portrayed in a scholar’s dress. Fuk is responsible for conferring good descendent luck. His star is associated with the auspicious planet jupiter. Fuk is also sometimes known as Fu which is the character for good luck (also sometimes represented as a bat).

Luk holds a Ru Yi or revered scepter of authority and respect. He is dressed in the imperial robes of the mandarin. He was known in ancient China as the star god who ruled over success in the famed imperial examinations. Luk is also sometimes represented as ‘Lu’ which specifically is a reference to the salary of a government official. Luk represents authority, prosperity and influence.

Sau cups a peach in his hand, a symbol of youth, beauty and immortality. His star is said to rule over the length of mortal’s lives. Legend says that Sau was in his mother’s womb for ten years before he was born and came into this world already an old man. His high domed forehead is another one of his distinguishing traits and he is usually shown smiling and happy.

These gods are not prayed to or displayed on an altar. They are symbolic representations of the auspicious stars and so have a more casual presence than a bodhisattva or revered god. Fu Lu Shou possess a strong yang energy however and so should always be displayed in places of utmost respect and formality, namely NOT the bathroom, bedroom or kitchen.

5 Element Charm for Health, Wealth and Happiness
US$25.88
Add to Cart

Laughing Buddha on Dragon Tortoise
US$25.88
Add to Cart
Bestsellers