Anti-Cheating Amulet With Kuan Kung
US$20.88

Love Amulet with Moon Rabbit
US$19.88

Healing Deer Carrying The Vase Of Longevity With Linzhi
US$139.88

5 Element Pagoda With Tree Of Life Amulet
US$20.88 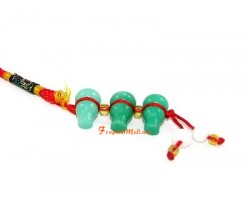 To prevent bad chi from causing accidents, hang this lucky charm in your vehicle of transport.

There are many symbols of longevity; one of these is Wu Lou, which can bring a profusion of blessings into the home. This special bottle gourd has been an icon of longevity, good health, and prosperity for many centuries. The Wu Lou, also known as the calabash is an important tool used in enhancing the effects of Feng Shui.

The traditional of the Wu Lou started in ancient China, when gourds served the purpose of carrying water on long embarkments. In addition to simply water, medicine was also stored in the gourds; this is where the image of it as a “symbol of health, vitality and immortality ” was derived.

The shape itself of the Wu Lou plays an important role in its image; it is a depiction of heaven and earth unified. The top half of the gourd symbolizes heaven, and the bottom half is earth. The use of the gourd by humans indicates the harmony between earth, heaven and humanity.

The Wu Lou is also said to have the ability to absorb bad chi, for the reason that Taoist monks use the gourd to incarcerate evil spirits. According to Chinese mythology, monks and deities of the Taoist belief made use of the gourd, trapping evil presences inside to prevent them from causing misdemeanour. This is where the Wu Lou got the ideology of being able to absorb negative chi in your surrounding.

When a Wu Lou is being used for Feng Shui, it is imperative to attach a red thread around the “neck” to enhance its energy. This amulet is made of jade - the most beloved gemstone of the Chinese. Recorded history has shown that this stone has been used as jewelry since 5000 years ago! It's also known as the 'stone of heaven' or 'noble stone' and was held higher in value than gold in olden times. Jade was a symbol of rank, power and wealth for kings, emperors and noblemen. Confucius mentioned that jade contained and reflected human virtues like durability, purity, serenity and radiance. To many Chinese, jade has magical protective powers that keep the wearer from harm. Considered to be the ultimate Feng Shui crystal, jade charms are said to bring harmony, attract good luck and friendship and promotes self-sufficiency. It also increases nurturing and love that can be used to harmonize dysfunctional relationships. Mentally, jade helps discard negative thoughts and soothes the mind as well as stimulates ideas.

Carry or hang this Wulou amulet near you as it's said to attract health energies and prevent any diseases or health problems. A thoughful gift for someone facing illness or undergoing a medical treatment as it's believed to give them strength to recover. People who often face difficulties with bad luck you will find this charm helpful as it's reputed to absorb bad chi. Hang it in your office or car to neutralize negative energies that can harm your career or cause accidents on the road respectively. A must-have especially if your horoscope sign is afflicted by the Illness energy of the year.

Anti-Cheating Amulet With Kuan Kung
US$20.88

Love Amulet with Moon Rabbit
US$19.88

Healing Deer Carrying The Vase Of Longevity With Linzhi
US$139.88

5 Element Pagoda With Tree Of Life Amulet
US$20.88