Bejewelled King Gesar of Ling on WindHorse
US$148.88
Add to Cart

Golden Rat Holding Coin With Your Wealth Has Arrived
US$79.88

Wealth Wallet with Wealth-Spouting Mongoose in Silver
US$39.88

Red Windhorse for Success Luck
US$79.88 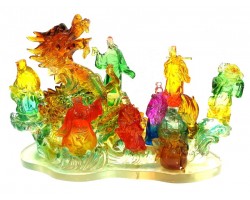 This is an absolutely gorgeous figurine of the 8 immortals on a boat crossing the great waters that will sure to catch lots of admiring eyes and auspicious energies!

The 8 Immortals each guard one of the eight directions, so their presence in the home ensures all round good feng shui. Display this beautiful Eight Immortals in the living room to bring you plenty of good luck and to protect you from all kinds of harm and bad luck.

The Eight Immortals, according to ancient tales, were summoned from heaven to help humans in reaching their objectives and aspirations. This colorful figurine crafted out of resin, portrays the Eight Immortals crossing the sea – keeping this piece in your home or workplace therefore symbolizes that they will support you in your ventures and summon eight kinds of goodness into your life. As each of them guards one of the eight compass directions, displaying them in the home is said to attract good Feng Shui luck from all around.

The Eight Immortals are a group of legendary Taoist immortals in Chinese mythology. The Eight Immortals crossing the great waters is one of the best tale known that involves all of them. It tells the story of how the Eight Immortals, through the use of each of their magical objects and instrument successfully crossed the extremely rough and stormy East Sea. Because of this reason, Eight Immortals Crossing the Great Waters has risen to become a symbol of overcoming all obstacles and achieving success through different methods and special skills.

In the following of Feng Shui and Taoist worship, the Eight Immortals are known by many as symbols of long life and good fortune. A combination of two women and six men, they are higher beings who were summoned from heaven with the intents to help the human race with their endeavours, aiding them in achieving their objectives and providing them with the means to obtain riches, reputation, vigour and wisdom. When the Eight Immortals are displayed in your home, they will create an environment in which health, wealth and joy can be generated.

Each of the 8 Immortals possesses a different object of power which is able to practise mystical magic. Below are the qualities of each Immortal:

First Immortal: “Chung-Li Chuan”, the icon of longevity, is known as the leader of the immortals. This is due to the fact that he is the one who discovered the Elixir of Life and has the capability to cure the ill and bring life back to the dead. His special tool is a magical fan, and occasionally a peach.

Second Immortal: “Chang Kuo-Lao”, the symbol of wisdom, is an old man with the power to create a child for couples who have been unsuccessfully trying. He holds a bamboo tube, and is seen upon a mule which can take him as far as a thousand miles in a single day.

Third Immortal: “Lu Dong-Pin”, the icon of scholastic success and safeguarding, is a Taoist academic who exterminates malicious spirits and monsters with his magic sword. He also carries with him a fly-whisker, which can cure diseases and create health.

Fourth Immortal: “Ts’ao Guao-Chiu”, is the symbol of distinction and reputation. He was affiliated with the Sung Imperial family, and so is the best dressed in comparison to the other Immortals. He keeps with him a jade tablet of permission to court, and also a delicate feather fan.

Fifth Immortal: “Li T’ieh Guai”, also known as “Iron Crutch Li”, is a poor beggar burdened with a crutch and a Wu Lou. Despite his poverty, he is regarded as the most influential of the Eight immortals, because he has the capability to create wisdom. He is often seen with a deer as a companion.

Sixth Immortal: “Han Hsiang Tzu”, is the most joyful of the Eight Immortals, and is able to create healing energy to cure ailments. He is depicted as playing the flute that he carries with him.

Seventh Immortal: “Lan T’sai Ho” is one of the women Immortals, and so brings good fortune to young women. She is depicted with a basket of fresh flowers in tow.

Eighth Immortal: “He Hsien Ku” is the other woman Immortal, and is the icon of luck in relation to marriage and family establishment. She is known as the “Immortal Maiden”, and holds a mystical lotus blossom as will as a fly-whisk.

Some Feng Shui tips on how to harness the powers of these divine immortals:

*Note* Always show respect for the Eight Immortals by never placing them in the bedroom, kitchen or toilet.

* Requires 2x AAA batteries (not included)
* LED Lights are not replaceable. Please note that using the built-in light is completely optional, and prolonged use may result in some of the LED bulbs to burn out (not replaceable). This, however, does not diminish the function of this Feng Shui product to bring you good luck.

Bejewelled King Gesar of Ling on WindHorse
US$148.88
Add to Cart

Golden Rat Holding Coin With Your Wealth Has Arrived
US$79.88

Wealth Wallet with Wealth-Spouting Mongoose in Silver
US$39.88

Red Windhorse for Success Luck
US$79.88