The Power of Wealth Gods

Home » The Power of Wealth Gods

Wealth Gods have long been an important part of life in many Asian cultures. China, India, Korean and Thailand natives all seek help from wealth deities, though each region focuses on different figures. Today, modern believers in feng shui, whether Asian or not, ask for wealth and financial luck from the Wealth God of their choice.

Each New Year, it is common practice to worship these gods, asking for their benevolent help in fulfilling wishes. Inviting a Wealth God into your home each year often becomes a New Year tradition since it sets the pace for abundance in the coming year. 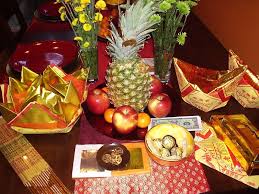 When choosing a Wealth God figurine, look for someone you feel particularly close to since your attraction to this figurine may indicate a particular bond that is forming. Famed Feng Shui author Lillian Too has often written about Chinese Wealth Gods, calling prayers to them “wondrously beautiful.” She has said that not only do people pray to become wealthy on a personal level, but to spread the wealth throughout the world.

Depending upon the Asian culture, different deities emerge as frontrunners for the Wealth God of choice. Tibetans have their five Jambhala Wealth Gods. Koreans and Thais have wealth Buddhas, too, though they differ from those in Tibet. Chinese Taoists worship several Wealth Gods and also revere the Eight Immortals and the Laughing Buddha as bearers of good fortune when a figurine is brought into the home or a decorative item featuring their likeness hangs on a wall. The three star gods known as Fuk Luk Sau who represent wealth, health and longevity are also very popular wealth-inviting Gods.

Statues or figurines of Tibetan Wealth Buddhas – Jambhalas or Dzambhalas – are often blessed and then placed on an altar near a flow of water where the water falls on the crown of their head. This stems from the belief that the jambhala carries a mongoose (resembling a rat) that spits forth precious jewels signifying wealth. To place the Jambhala in this manner, with a constant stream of water flowing over it, is said to ensure a steady stream of financial success.

Perhaps the most popular Wealth God is Chai Shen Yeh. He is most often found as a figurine where he is offering up an ingot of gold and either stepping on or sitting on a ferocious tiger, taming it and preventing it from capturing the wealth.

If you choose to display a wealth deity in your home, the recommended location would be facing the main door, because this promotes the chance that any chi that enters can be transformed into auspicious financial energy. If you wish to display the Wealth God elsewhere, consider a table or other piece of furniture in your dining room, providing it is sufficiently elevated to signify respect. The dining room is chosen as a natural place of abundance because of the nourishing food that flows through the room.

Firm believers in feng shui, and particularly Chinese conducting business, are convinced that placing a Wealth God behind them as they deal with the public or conduct their business will increase the support of their business and magnify their chances for success and powerful money luck. The larger the Wealth God, the larger the amount of money, it is believed. Businessmen even place Wealth Gods in the home in belief that their money luck starts there, even before they venture out to begin their work day. Fuk Luk Sau is a common deity placed in such homes since this deity is thought to protect material goods and provide good fortune for all who live there.

Since Chinese Wealth Gods seem to be the most popular and most used even in modern culture, they will be discussed in detail here. Note that the Chinese differentiate between Wealth Gods of a civilian nature and those who are military in nature, with the exception of Zhao Gong Ming, who is the most important overall Wealth God of all.

Important civilian Gods of Wealth include Bi Gan and Fan Li and the major warrior or military God of Wealth is Kuan Kung. There are Informal Gods of Wealth that do not precisely fall in either category and these are Wu Lo Chai Shen and Li Shi Xian Guan. Liu Hai who baits the Three Legged Toad is also an auspicious God of Wealth.

Let us examine each god individually: 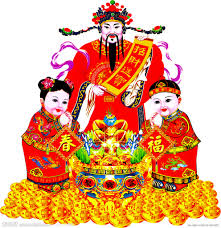 He is also known as Zhang Gong Ming and throughout the world, the Chinese and followers of feng shui worship this most influential and powerful of all Wealth Gods. His popularity remains strong today. People turn to this deity not only to attract wealth luck but to protect from disaster regarding any current financial success. He is thought to be so kind and compassionate that he will answer any prayers made to him. He is thought of like a wish-fulfilling jewel, able to make one’s wishes come true.

Despite his benevolent nature, in statue or figurine form, Chai Shen Yeh is most often seen riding a black tiger as a symbol of power. He often has a heavy beard and a darkened face and he holds a whip (in earlier versions) or a gold ingot.

Legend has it that in ancient China, Buddha appointed him “Xuan Tan Zhen Jun”, ruler of the distribution of wealth and good fortune. To this day many believe he still holds that position of authority and he has the capacity to make one’s fondest wishes for financial success a reality. He is found in statue form in many homes, inviting the relief of financial woes, and businesses often display a figurine of this Wealth God to court his favors. 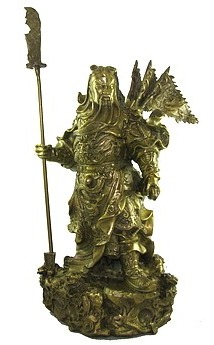 businessmen seeking to overcome the competition at work, since he is said to have strong combative powers where wealth is concerned. To derive the most benefit in competition luck, call upon the fierce Kuan Kung in the 9-Dragon robe. Place this figurine inside the home or office facing the front door. The job of this mighty warrior is to not only attract wealth but to protect the wealth that already exists. Seek this version of Kuan Kung if there is an intense need for his services or if your competition is particularly aggressive.

Many other images of Kuan Kung are available. Best suited in most occasions would be the Standing Kuan Kung or the image of Kuan Kung on horseback. Standing Kuan Kung depicts the strength and courage he possesses as he stands, ready to take on the world. Kuan Kung on horseback indicates the ability to bring about swift results and the ability to speed through difficulty. Horses are thought of as noble creatures able to achieve high speeds while maintaining dignity and quiet strength.

Look at the face of the figurine to see if he is depicted as being fierce. Basically, the fiercer the better. As for size, the bigger and heavier he is, the more powerful will be his energy.Give Kuan Kung the respect he deserves by placing him in an elevated place as opposed to at ground level and placing him at or near the door will allow him a view of those who enter.

BI GAN
This civilian God of Wealth dates back to the times of the Shang dynasty. Bi Gan was the uncle of the Emperor Zhou, in control of the finances of the Imperial dynasty and known for being impartial in his distribution of the wealth the Emperor possessed.

FAN LI
Another civilian wealth deity, Fan Li was distinguished in nature and known as a politician and strategist in addition to being a highly successful businessman. He, too, helped the Emperor. When he retired, he moved with his family to the countryside and he was able to continue to amass a fortune with his knack for finances. But he did not hoard his wealth and was known to distribute portions of it to those in need, performing many philanthropic acts and earning him a position as a Wealth God.

WU LO CHAI SHEN
This is the collective name given to the Wealth Gods of the Five Directions – East, West, South, North and the Center. Together these gods of five directions form a powerful Wealth God who can be called upon to bless your financial endeavors at home, at work, or when you travel.

In keeping with the auspicious number five, it is thought to be highly auspicious for a businessman to receive a figurine of Wu Lo Chai Shen on the fifth day of the Chinese New Year. This would make an ideal belated holiday present for a friend involved in business. They would then place the figurine on an altar that they would create and make offerings of some sort each day, requesting speedy help with prosperity luck.

LI SHI XIAN GUAN
Although not technically a formal Wealth God, Li Shi Xian Guan is known as a deity who accompanies a God of Wealth and has their ear in terms of whispering requests. “Li Shi” means to profit from transactions. Chinese and feng shui believers place his image inside the entrance of a business to seek abundant profits. 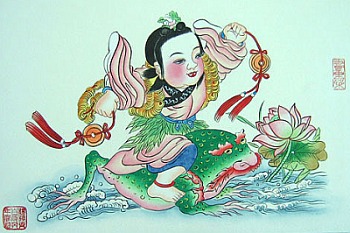 Another wealth god, Liu Hai is nicknamed Hai Chan Zi. The “Chan” here refers to the famous Money Frog or Three Legged Toad. The very presence of this toad is believed to not only attract money but also is said to ward off poison in the body and strengthen the heart. In ancient times, the toad was highly thought of in terms of curing illness and attracting good luck. Liu Hai often is depicted holding a string of coins, which were used to pull the tree legged toad from the sea. Liu Hai tamed the toad causing it to sprinkle money each time he dangled coins in front of the toad, the proceeds which he used to help the poor. The good fortune and abundant money he brings with him makes him highly revered.

Inviting one or more of these Wealth Gods into your home or business is an excellent Feng Shui way to increase your potential for financial and wealth luck and all the blessings they can bring to you.