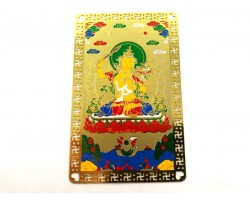 Carry this golden metal card featuring the Manjushri with Flaming Sword to expand your wisdom and academic luck.

He's depicted wearing a lavish crown, seated on a beautiful lotus throne, holding a fire sword aloft in his right hand. A lotus stalk rises on his left side bearing a book.

Manjushri or Manjushree is the Bodhisattva of Divine Wisdom and Knowledge, also known as the "Gently Auspicious One", and the flaming sword (khadaga) is his weapon. This sacred two-sided sword represents wisdom. It cuts through the net of ignorance and delusion, hostilities and conflict, obscurity from the truth and misunderstanding. He bestows the power of eloquence and memory. Manjushri is traditionally invoked by writers and scholars because he is worshipped as the patron of arts, linquistics, grammar and sciences. Of all the Bodhisattvas, Manjushri has perhaps the closest association with the Buddha, and could be said to represent his genius. One of the would-be Buddhas, he eliminates darkness and spreads true knowlegde.