Victory Banner with Mystic Knot and Evil-Eye Keychain
US$16.88
Add to Cart 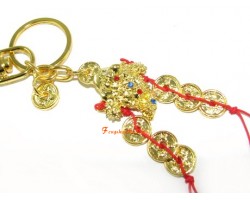 Beautiful shiny golden keychain showcasing a three legged toad or money frog biting on two strings of gold coins. In its back are seven faux jewels depicting the 7 Great North Pole stars of the bagua, which fundamentally triggered the study of Feng Shui in ancient China. Carry it brings the luck of money into your life.

The Money Frog, also recognized by name the “Three Legged Toad”, is a celestial and mythical creature, emerging every full moon to bring with it wealth and good fortune. It is one of the most prominent icons of prosperity and monetary gain in Feng Shui, and can often be spotted beside cash registers, receptions and owners’ desks all across Asia.

In ancient Chinese folklore, the Money Frog was the wife of renowned man who attained the Elixir of Mortality from Hsi Wang Mu, the Goddess of the West. The frog, who at that time was still a maiden, was jealous and so stole the elixir from her husband. As retribution by the other gods, she was transformed into a three-legged frog and sentenced to reside on the moon. Because of this, the Money Frog is often seen sitting on a bed of treasure, carrying two strings of coins and biting one in the mouth – her natural greed requires that she always be surrounded by riches. This is why she is such a strong symbol of prosperity that is used extensively to attract wealth luck and abundance. According to an Chinese legend, the money frog was caught by using gold coins as baits by Liu Hai, a Taoist God of Wealth and one of the Eight immortals.

Keep this good luck charm with you to attract wealth luck and boost money luck.

Victory Banner with Mystic Knot and Evil-Eye Keychain
US$16.88
Add to Cart